skip to main | skip to sidebar

The futility of shame 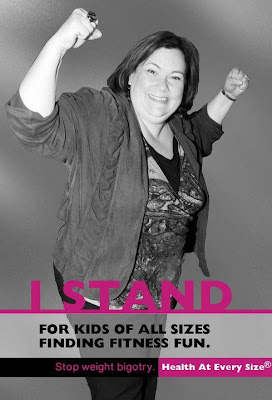 Lately the Strong4Life campaign in Georgia has received a lot of publicity and a LOT of pushback.  For those of you who aren't familiar, this is a group of ads that depict fat children in black and white photography and seeks to convey how miserable it is to be a fat child.  They claim that this is a "wake up call" for parents who apparently don't know that their kids are fat and have somehow missed the message in our culture that being fat is "bad".  They insist their goal is not to make kids feel bad (even though the images look like shots of hardened criminals).  No, they claim, these messages are for the lousy parents who have somehow slept through the last 100 years of fat hatred and have negligently allowed their poor kids to get fat.

When confronted by critics with the ideas that these images could be extremely emotionally damaging and would increase stigma for fat children, Strong4Life supporters have suggested that the billboards are for parents and that the kids probably don't even see them.  But let's get real.  These billboards are about shame.  Shame for parents of fat kids and shame for fat kids.  How dare these parents allow these kids to become an unacceptable shape.  How dare these kids pollute the world with their visually unacceptable bodies?

Shame has been used for decades to help people lose weight.  But here's the thing about shame as a weight-loss tool, it doesn't work.  Just like virtually every other weight-loss tool in the universe (outside of amputation) it doesn't work in the long term.  And in the short term, the side effects are devastating.  Stigmatization of fat kids is getting worse.  And since the ads don't offer any helpful suggestions for how these fat kids are supposed to get skinny, it seems likely that many of them will take it on themselves.  And when these kids go on diets, starting as early as age 7, do they end up thinner in the long run?  Nope.  They end up both heavier and at greater risk for disordered eating.  Add this to the fact that kids of all sizes can be healthier by simply adding nutritious foods and regular and fun physical activities to their lives and you've gotta wonder--what are those Strong4Life people thinking?  How does THIS help kids?

So what can we do?  Well for one thing, we can work to counteract some of the negative side effects of the Georgia campaign.  Marilyn Wann has initiated an amazing campaign called "I stand against weight bullying".  In this campaign, Marilyn has created a design template that imitates the Strong4Life ads and invites people to submit pictures of themselves and statements to represent themselves.  These images are then submitted via facebook and an amazing tumblr feed.  My image is shown above.  Go to the facebook page and learn how to submit a picture of your very own!

In addition, the most awesome Ragen Chastain, worked with several other members of the size acceptance community to create a campaign to raise money for billboards that feature a size-positive response to the Strong4Life ads.  She's initiating a money bomb TOMORROW to get the ball rolling and raise money to meet an amazing $5,000 matching grant from More of Me to Love.  So dig through your change jars and make a contribution already!

You CAN be part of the solution for kids of size all over the world.  You can show them that they are, and will be okay.  You can demonstrate that healthy and happy life is possible at all sizes.  And  you can remind them that every BODY deserves love (including you my darling chicklettes).

The Fat Chick
Hi, my name is Jeanette and I'm The Fat Chick. Not just any chick mind you, THE Fat Chick. I am a fat and healthy exercise instructor and Hollywood producer. Believe me, if I can learn to love my looks and my body in THIS town, I can do it anywhere. And YOU can too!